How We Ship Strains

The CGSC generally distributes strains on sterile filter disks that have been impregnated with a small amount of glycerolized culture and wrapped in sterile foil.

Cultures are viable in this state for approximately 12-15 days at room temperature, but we suggest that you culture the strains as soon as possible upon their arrival. If for some reason there is a delay in reviving the strains, the best way to preserve them is to store the wrapped filter disks at -80 deg. C until you can revive them.

To resuscitate the strain, aseptically place the disk onto a suitable agar plate (typically LB agar). Then rehydrate the disk with a drop of sterile LB broth and isolation streak out from the fluid surrounding the disk to obtain isolated colonies. The filter disk can be left on the plate during incubation. The resulting isolated colonies can then be screened to check their genetic markers and antibiotic resistance phenotypes.

Isolation streak from moisture around disk

Strains are typically mailed in an 9" X 11" Tyvek envelope shown below: 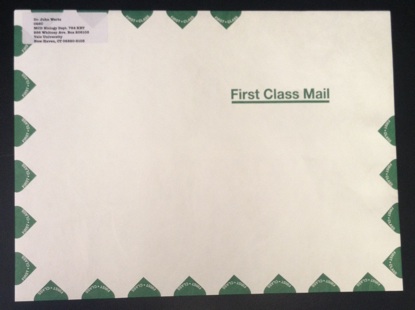 It has always been our policy to replace, at no cost, any cultures that cannot be revived upon delivery.